Bows and arrows have always been around since the dawn of fire, and many civilizations were built and destroyed because of this seemingly simple-yet-sophisticated technology. Back in the day, the use of reflex bows were reserved for the selected elite who precisely knew how to point, shoot and retreat. The use of this type of bow involved a highly technical skill, and it evolved as a foraging, protection, fighting and sporting tool in that order.

Modifications were made in 1966 in Missouri, US and thus, the compound bow was born. Although the new technology added in way more features than the more straightforward reflex bow-and-arrow, the compound bow allowed hobbyists, such as myself, to take in archery as a sport for this significantly improved the bow’s precision and stability.

While a compound bow looks complicated to a beginner, its hardware mechanics are actually simple to understand. Here, we lay out some important pointers to consider but first, a diagram to provide context: 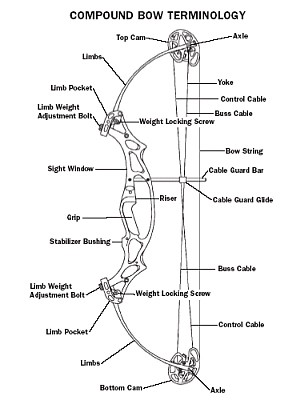 It is useful to understand that a compound bow operates under the “let-off” system, wherein pulleys (also called “cams”) on both sides of the bow allow the user to use less energy and gain greater control over the trajectory of the arrow.  This system increases the rigidity, precision and accuracy elements of the compound bow.

Some More Things to Consider

With so many compound bow options available in the market, how is it possible to know which one is the best for your needs? Here, we highlight the top three things you have to consider